The frontier awaits! The Paley Center for Media celebrates Star Trek: Strange New Worlds, the latest incarnation of the groundbreaking Star Trek franchise, with an immersive exhibition and a broader exploration of the many acclaimed series in the Star Trek universe of series, which have captivated audiences across decades.

Throughout the celebration, the Paley Center will host special screenings, opportunities to view the uniforms and artifacts from several series, weekly kids and family programs featuring the animated hit Star Trek: Prodigy, and much more. These Paley programs will complement the exhibition and allow visitors to further explore Star Trek's impact on our culture and our world. 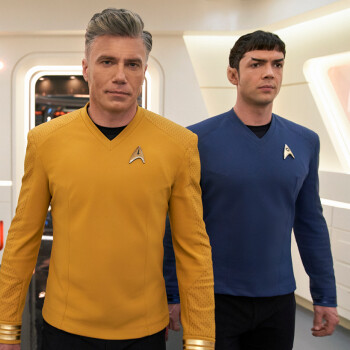 On April 27, the Paley Center will open an exhibition focused on the Star Trek universe and the new Star Trek: Strange New Worlds. This will include Starfleet and Vulcan uniforms, set pieces including the USS Enterprise, artwork, video clips, and more. Have a seat in one of the Captain’s chairs and take your crew to warp speed! Star Trek: Strange New Worlds premieres on May 5, exclusively on Paramount+. 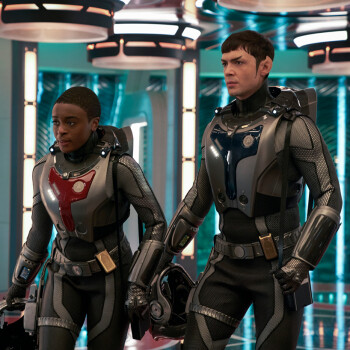 Daily Screenings—Experience the premiere episodes on the big screen from various Star Trek TV series, including “The Cage," the 1965 pilot episode from the original Star Trek series. Screenings begin at 12:10 pm ET daily.

Weekend Kids Activities & Family Screenings—Every weekend in May, episodes of the Star Trek: Prodigy animated series; and the original Star Trek: The Animated Series (1973) voiced by William Shatner, Leonard Nimoy, and others from the original cast; along with Star Trek crafts for the kids; and surprise guests.

Keep Me Updated On All Exhibits & Events

Paley Members receive free admission every day for you and a guest, priority early access, once-in-a-lifetime VIP experiences, and more.

Already a Paley Member? Thank you! Input your unique membership ID or the temporary code in your confirmation email into the access key field when choosing your date and time below.

Choose your entrance date and time

Note: There are no screenings in the Bennack Theater on May 11.

“The Cage” is the pilot episode for the Original Series, following the crew of the starship U.S.S. Enterprise, led by Captain Christopher Pike (Jeffrey Hunter). (1965)

Following the crew of the starship U.S.S. Discovery, this series begins a decade before the Original Series in the twenty-third century, showing the beginnings of the Federation-Klingon cold war. In this episode, First Officer of the U.S.S. Shenzhou Michael Burnham (Sonequa Chaunté Martin-Green) discovers an object of unknown origin. (2017)

Star Trek: The Next Generation Premiere: “Encounter at Farpoint”

The premiere of The Next Generation is set seventy-eight years after the Original Series in the twenty-fourth century. In this debut episode, the crew of the Enterprise, led by wise and diplomatic Captain Jean-Luc Picard (Patrick Stewart), must battle an omnipotent force named Q. (1987)

This series focuses on the retired life of Starfleet Admiral Jean-Luc Picard (Patrick Stewart), originally set in 2399 after the destruction of the planet Romulus. (2020)

This animated series, with much comedy, follows the support crew of the Starfleet’s U.S.S. Cerritos, beginning in the year 2380. (2020)

This new Star Trek series is based on the years that Captain Christopher Pike (Anson Mount) headed the U.S.S. Enterprise. (2022)

This the first Star Trek series aimed at a younger audience. In the premiere episode of this CG-animated series, a group of alien teens, exiled on a mining colony outside of Federation space, discover an abandoned Starfleet ship. (2021)

With guidance from the hologram advisor Janeway, the young crew of the Protostar is seriously challenged when their ship is on a dangerous cosmic collision course. (2021)

Star Trek: The Animated Series: "Beyond the Farthest Star" and "Yesteryear"

Events, dates, and participants are subject to change.​