Highlights from The Paley Center for Media Collection

Musicals on Television: An Afternoon with Sheldon Harnick

the Paley Center is pleased to honor the three-time Tony Award-winning lyricist Sheldon Harnick—who collaborated with composer Jerry Bock on landmark musicals  including the Pulitzer Prize winner Fiorello!, Fiddler on the Roof, and The Rothschilds.

The Canterville Ghost (1966), a musical that Harnick and Bock wrote specifically for television, will be screened along with the 1978 BBC telecast of She Loves Me. Bill Rudman, host of Sirius XM Satellite Radio’s Broadway Channel program “On the Aisle,” will be on-hand to interview Mr. Harnick about his work.

The Paley Center has partnered with NYMF each season since the festival began in 2004. 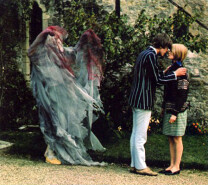 This updated musical version of Oscar Wilde’s short story concerns an American ambassador and his family who move into a castle haunted by a ghost, Sir Simon de Canterville (Michael Redgrave). With Douglas Fairbanks, Jr., Natalie Schafer, Tippy Walker, and Peter Noone of Herman’s Hermits as the “mod” Duke of Cheshire. Bock and Harnick songs include “Undertow,” “I Worry,” “If You Never Try,” “Vengeance,” and “You’re Super.” Directed by Burt Shevelove, who also wrote the book. (ABC; 60 minutes; color)

Directly following the screening, Sheldon Harnick will be interviewed by Bill Rudman about The Canterville Ghost and She Loves Me.