Like Alvy Singer said, “A relationship, I think, is like a shark . . . It has to constantly move forward or it dies.” And so we bring you our next viewing party, which, as it happens, is all about sharks: Join us for an evening of thrills, chills, and all-around fun and games as we premiere the Syfy Saturday Original Movie Jersey Shore Shark Attack. Led by a one-of-a-kind cast including Tony Sirico (The Sopranos), Paul Sorvino (Goodfellas), Jack Scalia (Dallas), Joey Fatone (‘N Sync),  William Atherton (Die Hard)—and Jersey Shore’s Vinny Guadagnino—the movie unfolds during 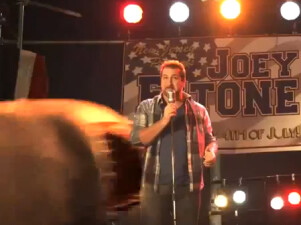 the July Fourth weekend at (where else?) the Jersey Shore, where angry sharks are on a rampage, devouring residents, leaving it to the locals to save the day. Man-eating sharks, trivia, prizes, refreshments … what more can you possibly want on a Saturday night in June?

Join the Conversation! We will LIVE tweet this event. Follow @paleycenter and use #PaleyLiveNY to join in. Your tweet will be seen in the widget we add to this page on the day of the event.