Benjamin Britten (November 22, 1913, to December 4, 1976) was the most renowned composer of 20th-century British classical music. To honor his centenary—and as part of the worldwide Britten 100 celebration—the Paley Center is presenting short films from the 1930s with music by the young Britten, followed by the American premiere of John Bridcut’s Britten’s Endgame, a BBC Four documentary about the final years of the composer’s life. Mr. Bridcut (who also directed the 2004 documentary Britten’s Children) will be on-hand to introduce his new film.

FREE for Paley Center Members
Included with general admission ($10 for adults; $8 for students and senior citizens; $5 for children under fourteen)

This collection of black-and-white shorts includes five films from the General Post Office (GPO) that highlight Britten’s social and political concerns and his love of the British landscape. Three of the films (The Way to the Sea, Coal Face, and Night Mail) represent one of the most fruitful partnerships at the GPO Film Unit—the collaboration between Britten and the poet W.H. Auden.

The Way to the Sea

(director: J.B. Holmes; 1936; 9 min.)
The London to Portsmouth railway line and its electrification are examined, prefaced with an historical representation of Portsmouth. Music by Benjamin Britten; commentary by W.H. Auden.

(director: Alberto Cavalcanti; 1935; 12 min.)
This short film looks at the work of the British miner and his significance to British industry.
Alongside the fairly conventional narrative on the structure of the coal industry, the film also uses sound, language, music and choral singing in dramatic fashion, and includes a critical social commentary.
Music by Benjamin Britten; verse by W.H. Auden.

(director: Lotte Reiniger; 1938; 5 min.)
A film ballet and fairy tale about a man who wins his true love with the help of the “wee folk”... and the latest Post Office initiative.
This short film is adapted from a Scottish folk tale in which young lovers Angus and Rhona are separated by her father as Angus is too poor to afford a dowry (or 'tocher' in Gaelic). The sequence in which Angus encounters “wee folk” by the side of a lake and Britten’s dialogue-free choral score (adapted from themes by Rossini) creates a beautiful and haunting piece. Music arranged by Benjamin Britten.

(director: William Coldstream; 1935; 20 min.)
This film documents the design and production of a postage stamp for the Jubilee celebrations of King George V. The film is in three distinct parts: the first is a look at Barnett Freedman sketching designs at his London home. The second demonstrates how Freedman's designs are turned into modern stamps, contrasted with staid Victorian attitudes to the introduction of a democratic ‘penny post’. The third part details the rise of stamp collecting and includes stills from King George V’s personal stamp collection.
Produced by Alberto Cavalcanti (uncredited); music by Benjamin Britten

(director: Harry Watt & Basil Wright; 1936, 25 min.)
A visual poem charting a postal train’s journey from London to Scotland—and one of the most critically acclaimed of all British documentaries—the film begins with a voiceover describing how the mail is collected for transit. As the train proceeds on its journey, we are shown the various regional railway stations at which it collects and deposits mail. Inside the train the process of sorting takes place. As the train nears its destination there is a sequence – the best known in the film, in which Auden's spoken verse and Britten’s music are combined over montage images of racing train wheels.
Music by Benjamin Britten; verse by W.H. Auden

These short films are part of Britten on Film: A British Council touring program. 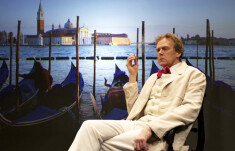 John Bridcut’s new film explores Britten’s creativity in the face of death. Those closest to him watched anxiously as he raced to complete Death in Venice in defiance of medical advice, tackling a challenging subject with resonances in his own life. His heart operation left him incapacitated, prematurely old and frail, yet he rediscovered his creative urge to produce two late masterpieces. This rich and poignant film about Britten’s final years includes archival footage of Britten and Peter Pears, plus recollections from John Shirley-Quirk, Dame Janet Baker, Britten’s assistant Colin Matthews, and his nurse Rita Thomson, among others.