Wednesdays to Sundays 12:00 to 5:00 pm
Closed Monday and Tuesday

"An Astounding Personal Testament to the Star Trek mythos" — Forbes

The Paley Center for Media is proud to partner with CBS Consumer Products in presenting the Los Angeles premiere gallery exhibition of Star Trek: The Art of Juan Ortiz. Star Trek (1966–69) occupies a rarified place in popular culture, and continues to be a force in all facets of media. Artist Juan Ortiz’s groundbreaking effort to personify each of the series's seventy-nine episodes, and the original pilot, through a collection of original art posters embodies his passion for the series, the transformational Sixties, and the often visceral reaction generated by each episode.

About the Artist
Influenced by bands like the Beatles and Grateful Dead, minimalist artists, and classic pulp movie posters, Ortiz combines these retro, often trippy images with Star Trek characters and allusions, recalling some of the more visceral elements of Star Trek (1966–69) and the era. Ortiz’s interpretations are uniquely stylized to reflect cultural prints and graphics developed and made famous in the 1960s. As Forbes noted “Ortiz has redefined the popular imagery surrounding Star Trek with his own aesthetic conception. In doing so, he has recalled the importance of Star Trek’s core values, its hope for a better future, free of war, famine, and disease. It is one man’s personal testament to his childhood memories of the greatest science fiction series of all time.” 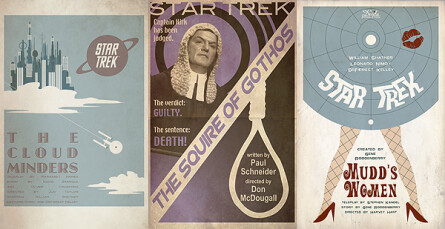