As part of the New York Musical Theatre Festival, the Paley Center pays tribute to Broadway composer and lyricist Richard Adler (1921–2012, best known for The Pajama Game and Damn Yankees) and offers screenings from our collection of a lavish 1968 television special of Kiss Me, Kate with Robert Goulet and the 1955 TV musical Our Town, with Frank Sinatra as the Stage Manager and Paul Newman and Eva Marie Saint as George and Emily.

A television musical based on the classic novel, with original songs by Richard Adler. With Jeannie Carson, Florence Henderson, Zina Bethune, Margaret O’Brien, Bill Hayes, Roland Winters, Joel Grey, and Risë Stevens. Directed by William Corrigan, with musical numbers staged by John Butler. Songs include “Love I Mean,” “My Little Women,” “Dance, Why Not?” and “The Four of Us.” (CBS; 60 minutes; b&w) 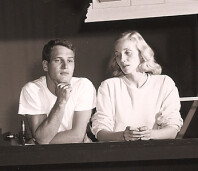