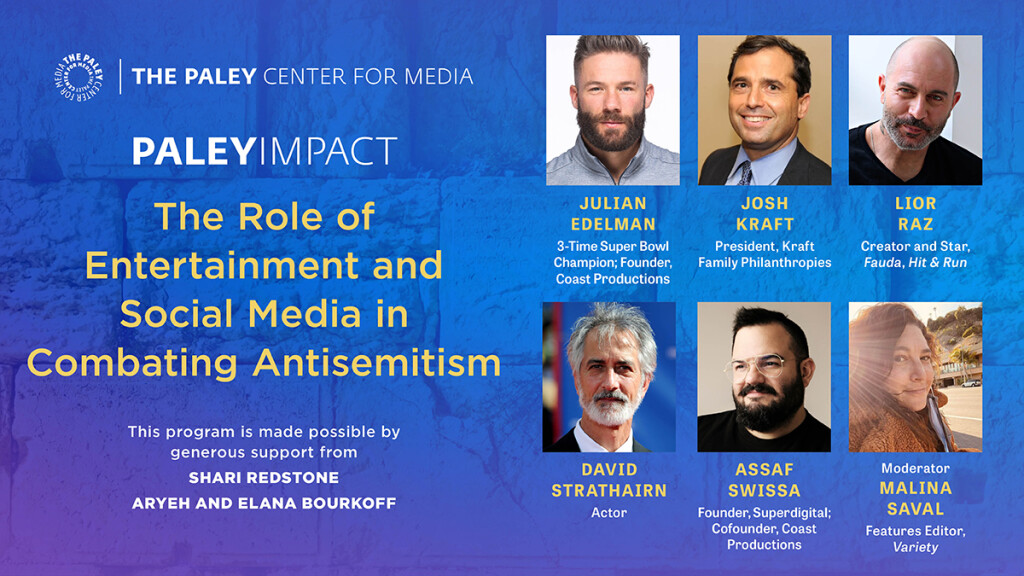 The Paley Center for Media Presents PaleyImpact: The Role of Entertainment and Social Media in Combating Antisemitism

New York, NY, October 26, 2021 – The Paley Center for Media announces its new program, The Role of Entertainment and Social Media in Combating Antisemitism to explore the importance of diverse and authentic portrayals of Jewish life on TV and social media. This program is part of the PaleyImpact quarterly series dedicated to examining media’s powerful shaping influence in combating the alarming rise in antisemitism, and will be released on Wednesday, October 27 at 10:00 am ET/7:00 am PT on the Paley Center’s YouTube Channel.

“The Paley Center for Media is committed to shining a light on media’s powerful shaping influence to combat the alarming rise of antisemitism, and to convening the leading voices in the entertainment industry as well as social media influencers, Jewish organizations, and cultural institutions to educate and inform the public.” said Maureen J. Reidy, the Paley Center’s President & CEO. “We would like to thank Shari Redstone and Aryeh and Elana Bourkoff for their continued support.”

“There’s no room for antisemitism or any other hate. We have to do better, most of all digitally, where hate can spread so quickly,” said Julian Edelman, 3-Time Super Bowl Champion. “I’m proud to be Jewish just like I’m proud to be American. America is at its very best when it’s tolerant, patient, and understanding—let’s aspire to be our best.”

“There are all kinds of Jews, and everyone has different stories and experiences: Jews in America, Israel, Jews of color, LGBTQ Jews,” said Josh Kraft, President, Kraft Family Philanthropies. “We need to share these personal narratives because there are so many different people that represent Judaism. Personalizing and humanizing the Jewish experience is what will educate people.”

PaleyImpact programs explore how media influences attitudes, behaviors, and actions, and shapes public discourse on critical social issues. The Paley Center has a long-established history of programs on this subject, including the recent The Media’s Role in Combating Holocaust Denial, Misinformation, and Antisemitism, and Media’s Role in Identifying, Explaining, and Combating Antisemitism.

In addition to hosting quarterly programs in the series, the Paley Center is actively working with leading organizations, to whom we are thankful for their ongoing support and commitment to develop educational resources and promote a better understanding of the dangers of antisemitism. These include The UJA-Federation of New York, Simon Wiesenthal Center, The Conference on Jewish Material Claims Against Germany, The U.S. Holocaust Memorial Museum, USC Shoah Foundation, JCC Association of North America, Jewish Federations of North America, American Jewish Committee, OpenDor Media, The American Society for Yad Vashem, The Kirsh Foundation, and Together Beat Hate.

The Paley Center for Media is a 501(c)(3) nonprofit organization that leads the discussion about the cultural, creative, and social significance of television, radio, and emerging platforms, drawing upon its curatorial expertise, an international collection, and close relationships with the media community. The general public can participate in Paley programs in both New York and Los Angeles that explore and celebrate the creativity, the innovations, the personalities, and the leaders who are shaping media. The public can also access the Paley Center’s permanent media collection, which contains over 160,000 television and radio programs and advertisements. Through the global programs of its Media Council and International Council, the Paley Center also serves as a neutral setting where media professionals can engage in discussion and debate about the evolving media landscape. Previously known as The Museum of Television & Radio, the Paley Center was founded in 1975 by William S. Paley, a pioneering innovator in the industry.