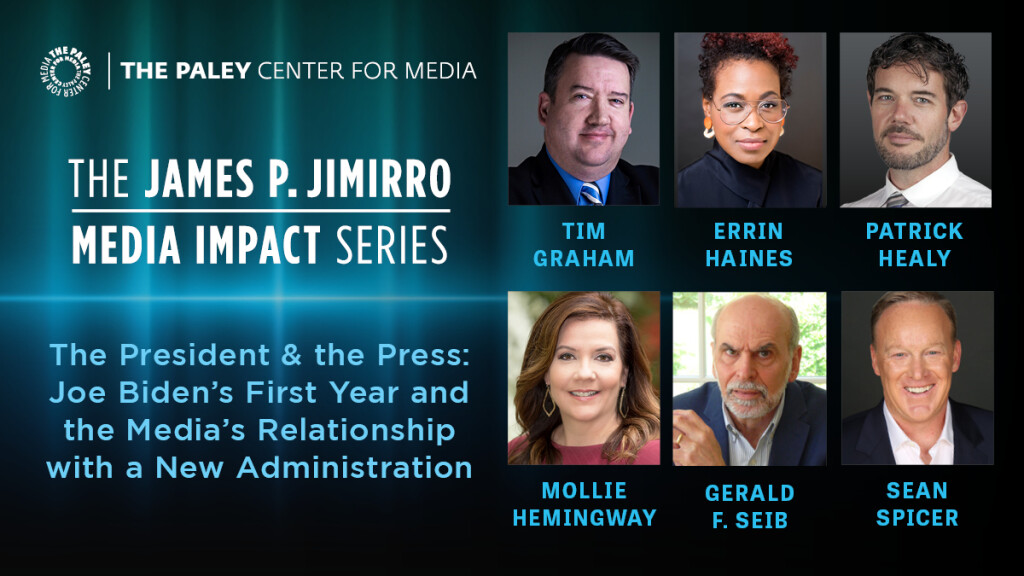 UPDATED AS OF 11/02/2021 The Paley Center for Media Announces The James P. Jimirro Media Impact Series: The President and the Press—Joe Biden’s First Year and the Media’s Relationship with a New Administration

On the first anniversary of President Joe Biden’s election, the Paley Center convenes journalists and scholars to evaluate how the press is covering his administration. The media’s relationship to each President is unique, depending on the times, their policies, and how such administration engages with journalists. The event will also explore how the media fulfills its vital role of ensuring that the American public is given an objective look at the administration and that all perspectives are considered.

“The Paley Center for Media is proud to convene this important and timely discussion that explores the dynamic relationship between the White House, the press, and the public,” said Maureen J. Reidy, the Paley Center’s President & CEO. “I’d like to express my sincere gratitude to James P. Jimirro for his continued support of Paley, and our commitment to showcasing media’s powerful shaping role in influencing general thought and behavior.”

"Since this time last year, a lot of things have changed, which includes a new president," said James P. Jimirro. "It's important to reflect on the state of this administration, and it is once again an honor to partner with The Paley Center for Media to educate and inform the public on the state of the news and the new administration."

"The relationship between the press and the White House has a significant impact in the state of our democracy. Joe Biden has promised to be the most Progressive president this country has ever seen, and reporters are charged with showing the public how his actions reflect his words," said Sean Spicer, author, Radical Nation, former White House Press Secretary. "I look forward to an open and honest conversation about this impactful political shift and the media's role covering the new administration."

The Paley Center for Media is a 501(c)(3) nonprofit organization that leads the discussion about the cultural, creative, and social significance of television, radio, and emerging platforms, drawing upon its curatorial expertise, an international collection, and close relationships with the media community. The general public can participate in Paley programs in both New York and Los Angeles that explore and celebrate the creativity, the innovations, the personalities, and the leaders who are shaping media. The public can also access the Paley Center’s permanent media collection, which contains over 160,000 television and radio programs and advertisements. Through the global programs of its Media Council and International Council, the Paley Center also serves as a neutral setting where media professionals can engage in discussion and debate about the evolving media landscape. Previously known as The Museum of Television & Radio, the Paley Center was founded in 1975 by William S. Paley, a pioneering innovator in the industry.