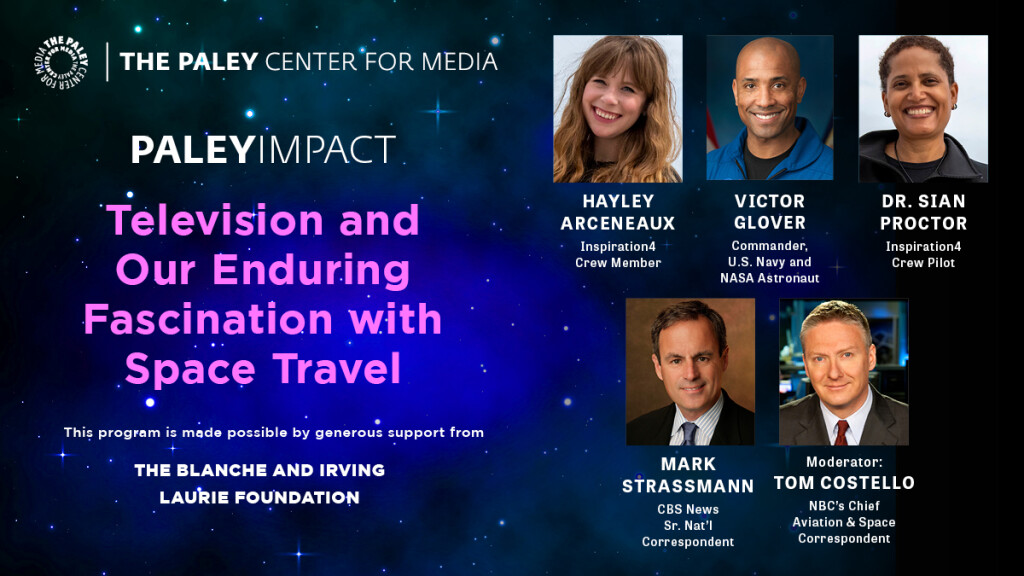 New York, NY – December 9, 2021 – The Paley Center for Media announces today its latest PaleyImpact, Television and Our Enduring Fascination with Space Travel, to examine how journalism and scripted entertainment bring the adventure and excitement of space travel to life across television and streaming media. This event is made possible by the generous support from The Blanche and Irving Laurie Foundation.

"It’s our honor and pleasure to convene such inspiring figures from across the scientific community and the media industry, to shed light on television's important role and unique ability to explore the evolution of space travel," said Maureen J. Reidy, President and CEO of the Paley Center.  “We're grateful for The Blanche and Irving Laurie Foundation for their continued and generous support to bring this impressive program to life."

"I enjoyed discussing space travel and the media's role in covering it with my Inspiration4 crew member Dr. Sian Proctor, NASA Astronaut Victor Glover, and two of my favorite space correspondents, Tom Costello and Mark Strassmann," said Hayley Arceneaux, Inspired4 Crew Member, cancer survivor, and the youngest American ever to go into space.

"It is important that the representation of space travel is not only entertaining, but also accurate," said Dr. Sian Proctor, Inspiration4 Crew Pilot, Geoscientist, and Space Artist. "The relationship between television and space exploration will require producers to have some type of discussion with space artists and scientists like myself so that they can get a true grasp of what takes place when we venture beyond Earth."

Since the 1950s, television has played a vital role in reflecting our collective fascination with space travel. The real-life US-Soviet space race was documented constantly on TV news. At the same time, beloved dramatic series like Star Trek, Battlestar Galactica, For All Mankind, and many others have given us a version of where space exploration might lead. Sixty years after Alan Shepard became the first American in space, and amid a time of incredible innovation, the Paley Center convenes astronauts and journalists to discuss this enduring connection between television and our fascination with this ongoing adventure.

For more information about The Paley Center for Media and to learn about the Paley Center's acclaimed programming, please visit www.paleycenter.org.