Mind Over Media: Are You More Powerful than Propaganda?

How did the Nazis rise to power in one of the most highly educated nations in the  world and in a democracy with a free press? They coupled sophisticated propaganda with advances in communication technology, 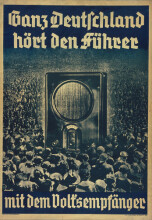 enabling their powerful ideas to reach millions. Today’s technology knows far fewer boundaries. The onslaught of unfiltered messages confronting each of us daily via social media and the Web challenges us to be critical consumers of information.

Join us for an election-year discussion with distinguished journalists, speechwriters, and other newsmakers that explores what propaganda is, when we are most susceptible to it, and how we can best recognize and respond to biased information today.

This event is part of the Robert M. Batscha University Seminar Series.

Join the Conversation!  We will LIVE tweet this event.  Follow @paleycenter and use #PaleyLiveNY to join in. Your tweet will be seen in the widget we add to this page on the day of the event.

Photo caption and credit:
A 1936 poster depicting a crowd surrounding a radio, entitled “All of Germany Listens to the Führer with the People’s Radio.” Bundesarchiv, Koblenz, Plak 003.022.025