The visionary chairman and CEO of Deutsch North America lives by a mantra to “always change the game.” His groundbreaking campaigns, including bold efforts for Taco Bell and Volkswagen that have become viral sensations, have further cemented his reputation as one of advertising’s most respected creative talents. In a conversation illuminated by video clips, Sheldon will discuss his techniques for achieving that “game changing” goal consistently across multiple platforms. 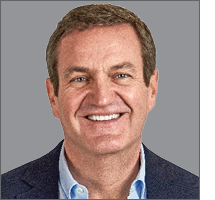 As Chairman & CEO of Deutsch North America, Mike Sheldon is at the helm of one of the most awarded creative shops in the U.S. In his two decades at Deutsch, Mike has transformed the agency’s LA office from a handful of people into more than 500-strong. Since taking on the role of North American CEO, his leadership of both the LA and New York offices has earned Deutsch a spot at the top of the Ad Age A-List, Fast Company’s Most Innovative list, and the Forbes “Ten Hot Agencies to Consider.”

Mike’s been a driving force behind iconic work for world-renowned brands like Volkswagen, Taco Bell, Target, Dr Pepper and Anheuser-Busch. By investing in digital, music, design, Hispanic marketing, production, artificial intelligence and other key capabilities, Mike has changed the game in the industry. He currently sits on the Boards of B. Riley Financial, The Starco Group, The Paley Center for Media and the 4A’s.

Media Council Members can view a livestream of this event at 7:00 pm PT on Thursday, October 4.