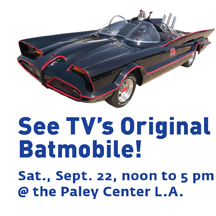 The Paley Center for Media partners with Warner Archive Collection for a thrill-packed weekend of rare screenings, exhibits, and onstage conversations celebrating a classically cool collection of some of TV’s greatest action-adventure heroes.

Great TV heroes come in all shapes and sizes. Some swing from vines or keep the oceans safe with their superhuman strength, while others are larger-than-life western lawmen, or can change themselves into the world’s mightiest mortal by uttering a single, magic word. At their best, they capture our childhood hopes and dreams and serve them up in a nonstop thrill ride of TV goodness. Join us at the Paley Center as we kick off the fall by partnering with our good friends at one of the coolest DVD imprints around, Warner Archive Collection, for a festival of rare screenings and in-person conversations with some classic TV greats. Plus enjoy guided tours of the Paley Center and Warner Bros.’ Television Out of the Box exhibit featuring a treasure trove of iconic costumes, props, and sets spanning six decades of your favorite shows and stars.

Great Deal!  Purchase a Full-Day Pass that admits one person to the three Saturday panels and all screenings.
-OR-
Individual Tickets:  Click below to purchase tickets to each of the four panels. Tickets to individual panels include admission to all screenings.

7:00 pm Screening & Panel
The Man From Atlantis with Patrick Duffy

Individual Tickets:  Purchase tickets for this panel, which include admission to all screenings.

Join the star of the series for a special screening and onstage conversation celebrating this sci-fi cult classic.

Four Man From Atlantis made-for-television movies aired during the 1976–77 television season, garnering top ratings and launching the career of a new star, Patrick Duffy, whose performance brought him fans who later in the decade would follow him to another hit, Dallas. Following the ratings success of the initial telefilms, NBC commissioned a Man From Atlantis series for the 1977–78 season, and a cult legend was born. Over the course of its thirteen episodes, the series followed the adventures of Mark Harris (Duffy), a victim of amnesia whose exceptional physical characteristics and abilities, including the ability to breathe underwater and withstand extreme depth pressures, superhuman strength, and especially his webbed hands and feet (!), lead doctors to believe he is the only surviving citizen of the lost civilization of Atlantis. Following this discovery, he is recruited by the Foundation for Oceanic Research, a government agency that conducts top-secret research and explores the depths of the ocean in a sophisticated submarine called the Cetacean.

Though it ran for only one season, the series was an international hit. It was the first U.S. series to be shown in the People's Republic of China, in 1980, and actually beat time-slot competitor Doctor Who (then in its fifteen season) during its initial U.K. airing. With a supporting cast that included Belinda Montgomery as Dr. Elizabeth Merrill (who had nursed Mark Harris back to health) and Alan Fudge as C. W. Crawford, Jr., and featuring Victor Buono as the villainous Mr. Schubert, The Man From Atlantis endures as a true pop culture classic.

Season one and all four TV movies of The Man from Atlantis are currently available through the Warner Archive Collection and through major online retail partners.

Great Deal!  Purchase a Full-Day Pass that admits one person to the three panels and all screenings.

10:00 am Animation Showcase Screening
Ray Bradbury’s The Halloween Tree
Sit on the edge of your seat and enjoy master storyteller Ray Bradbury's 1992 animated version of his classic adventure of four youths who try to save the spirit of their friend Kip from the ghosts of Halloween past. The four encounter a mysterious character, Moundshroud, who takes them on a magical journey that sweeps them back as far as 4,000 years and touches down in such places all over the world as Egypt, England, France, and Mexico. Along the way they discover the magic and meaning of Halloween—and friendship. This enchanting adventure features the vocal talent of Leonard Nimoy as Moundshroud, the animation wizardry of Hanna-Barbera, and is narrated by Ray Bradbury himself! It's a story as timeless as Halloween itself—a bubbling cauldron of thrills and suspense that will stir the imagination of the entire family and become a perennial Halloween favorite.

11:00 am Screening
The Herculoids
Somewhere out in deep space—and out of the creative imagination of the animation aces of Hanna-Barbera Studios—live the Herculoids. The animation favorite premiered as part of the CBS Saturday morning cartoon lineup. Humanoid Zandor, along with his wife Tara and son Dorno, leads a group of unique creatures: Zok the flying dragon, powerful simian Igoo (who possesses rock-like skin), rhinoceros hybrid Tundro, and two protoplasmic wonders appropriately named Gloop and Gleep. Together, they use their diverse super strengths to defend their utopian planet against attack from such sinister invaders as the Pod Creatures, the Reptons, and the Mutoids. Many years since its premiere, the series remains “out of this world,” literally.

Edgar Rice Burroughs’s immortal creation Tarzan took to the nation’s TV screens for the first time in 1966, premiering on NBC. In the capable hands of producer Sy Weintraub, TV’s Tarzan, starring charismatic film and TV performer Ron Ely, continued the more contemporary (and more authentic) interpretation of Lord Greystoke as a sophisticated, articulate jungle adventurer as seen in the Tarzan films of Gordon Scott, Jock Mahoney, and Mike Henry. Also carried over from the big screen was young actor Manuel Padilla (Tarzan and the Valley of Gold, Tarzan and the Great River), now playing the jungle lord’s kid sidekick alongside Cheeta, the simian one.

Ely, who added an additional layer of authenticity to the series by performing his own stunts throughout the run, also made his directorial debut on Tarzan. A familiar face on television and in film throughout the next three decades, Ely gained additional cult acclaim for his portrayal of Doc Savage in the 1975 feature film Doc Savage: Man of Bronze before establishing a new career as a best-selling author of mystery novels.

Season one of Tarzan is currently available through the Warner Archive Collection and through other major online retail partners. Season two is expected to be released next year.

2:00 pm Screening
Superboy
Brought to television in 1988 by Ilya and Alexander Salkind, the producers of the first three Superman movies and 1984’s Supergirl, Superboy starred Gerard Christopher as the titular "Boy of Steel" and Stacy Haiduk as Lana Lang.

Initially hearkening back to the Superboy comics of the 1960s and '70s, this live-action adventure series developed a cult following over the course of its three syndicated seasons by focusing on good storytelling and excellent action. Though it remains one of the most underrated facets of the Superman oeuvre, Superboy’s loyal fan following endures.

Over the course of eight seasons and 108 episodes, Cheyenne became Warner Bros.' first major television hit, and remains one of the medium’s most enduring and durable westerns. Following the adventures of Cheyenne Bodie, a former Army scout who went west after the Civil War and drifted from job to job—here a cowboy, there a lawman, but always a larger-than-life hero—Cheyenne was blessed with Clint Walker in its titular role, whose performance set the standard for stoic western heroes on television.

Walker’s own real life story is that of Hollywood legend. Just two years before becoming one of TV’s biggest stars, he was a security guard at Warner Bros., the very studio that produced Cheyenne. Premiering in 1955 over the ABC network, Cheyenne was the first hour-long western, and in fact one of the first hour-long dramatic series of any kind with continuing characters to last more than one season. The overwhelming public response to the series led the studio to develop a winning slate of westerns including Bronco and Sugarfoot, which would entertain audiences for decades to come.

Be sure to check out memorabilia from Cheyenne, including one of Clint Walker’s original costumes from the series, designed by Academy Award®–winner Marjorie Best (Giant), and memos from studio chief Jack Warner, at the Television Out of the Box exhibit.

Seasons one to three of Cheyenne are currently available through www.warnerarchive.com and other major online retail partners. Season four is expected next month and all seven by the end of the year.

5:00 pm Exhibit Tour
Warner Bros.’
Television Out of the Box
Experience six decades of Warner Bros. television magic in this special tour of the exhibition.
Requires a separate ticket. Discounted exhibit tickets will be available at the door to all event attendees.

6:00 pm Screening & Panel
Shazam! with Michael Gray and others

By uttering a single magic word, young Billy Batson transformed himself into the world's mightiest mortal, Captain Marvel, and Saturday morning TV would never be the same. From 1974 to 1977 actor Michael Gray, who had worked on series including Room 222 and Marcus Welby, M.D. and had costarred with Brian Keith in The Little People, starred as young Billy Batson, a role that established him as a major teen idol and cemented his enduring pop culture fame. Paired with veteran radio, film, and television actor Les Tremayne (North by Northwest) as his guardian Mentor, the duo traveled 1970s-era California in a mobile-phone-equipped classic RV while helping people out of difficult situations with the assistance of Billy’s alter-ego Captain Marvel.

Billy, who speaks directly to the elders who empowered him (Solomon, Hercules, Atlas, Zeus, Achilles, and Mercury) via a fantastical communication device, could of course transform himself into Captain Marvel by uttering the magical, SHAZAM! The iconic superhero was played first by Jackson Bostwick, and later by John Davey. Some thirty-five years since the series ended its initial run, it endures as a cult classic entertaining generations of fans worldwide.

8:00 pm Screening
Legends of the Super Heroes: The Challenge

A rare chance to see one of television’s most infamous cult classics on the big screen! Unseen for almost thirty years until unearthed by Warner Archive Collection, Legends of the Super Heroes: The Challenge represented one of Hanna-Barbera’s rare forays into live-action entertainment. Heroes and villains of the DC Comics universe square off in this made-for-TV (with a laugh track!) Superfriends-style smackdown to end all smackdowns! Legends of the Super Heroes: The Challenge features Batman and Robin (Adam West and Burt Ward of the classic live-action Batman TV series), The Flash, Green Lantern, and more members of the Justice League of America versus The Riddler (the great Frank Gorshin reprising his TV role), Mordru, Weather Wizard, and other fantastic Doom-dealers. The Legion’s ultimate gambit: trick the heroes into downing a diabolical de-powering drink!