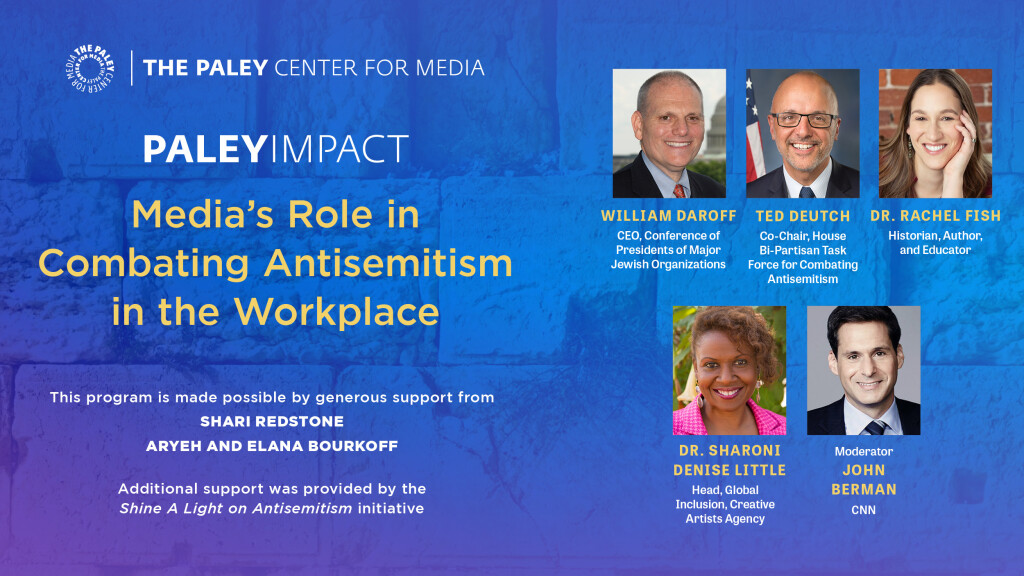 The Paley Center for Media Presents PaleyImpact: Media's Role in Combating Antisemitism in the Workplace

New York, NY, December 6, 2021 – The Paley Center for Media announces today its PaleyImpact program, Media's Role in Combating Antisemitism in the Workplace, to explore the media's role in raising awareness of the dangers of antisemitism in the workplace. This program is part of the PaleyImpact quarterly series dedicated to examining the media's powerful shaping influence in combating the alarming rise in antisemitism, and will be released today, Monday, December 6, 2021, at 1:00 pm ET/10:00 am PT on the Paley Center's YouTube Channel. The virtual event is made possible by the generous support from Shari Redstone and Aryeh and Elana Bourkoff.

"The Paley Center for Media continues our commitment to demonstrate media's powerful shaping influence to combat the alarming rise of antisemitism. This program explores the media's role in helping businesses and their employees identify antisemitism in the workplace to ensure a safe and positive environment for all," said Maureen J. Reidy, the Paley Center's President and CEO. "We want to thank Shari Redstone and Aryeh and Elana Bourkoff for their most generous support."

In addition to hosting quarterly programs in the series, the Paley Center is actively working with leading organizations, to whom we are thankful for their ongoing support and commitment to develop educational resources and promote a better understanding of the dangers of antisemitism. These include Shine A Light, The UJA-Federation of New York, Simon Wiesenthal Center, The Conference on Jewish Material Claims Against Germany, The U.S. Holocaust Memorial Museum, USC Shoah Foundation, JCC Association of North America, Jewish Federations of North America, American Jewish Committee, OpenDor Media, The American Society for Yad Vashem, and Together Beat Hate.