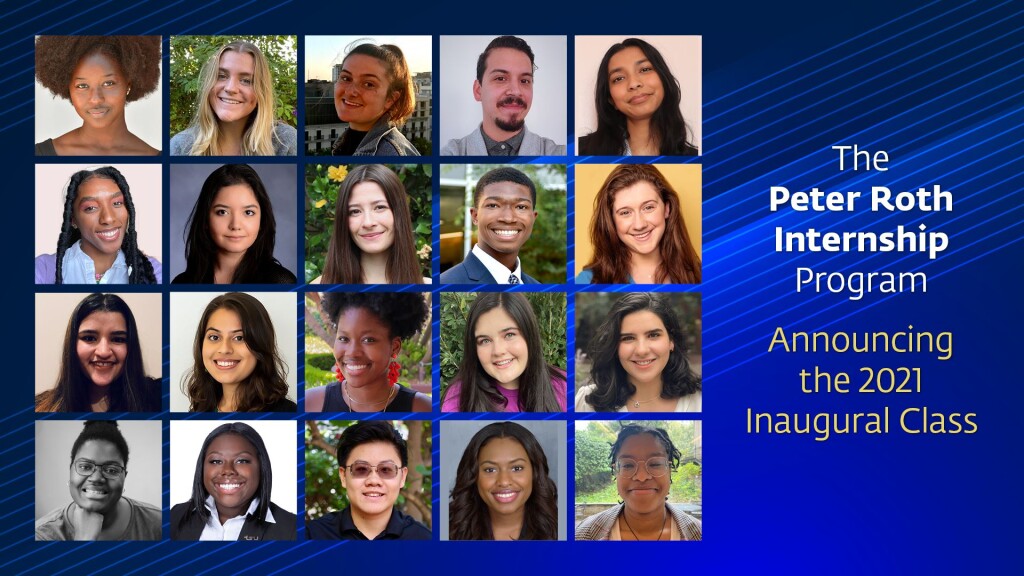 The Paley Center for Media Announces the Next Generation of Visionary Television Professionals, The Peter Roth Internship Inaugural Class of 2021

New York, NY, October 7, 2021 – The Paley Center for Media today announced the members of the inaugural class of The Peter Roth Internship Program. The program’s mission is to inspire the next generation of television professionals to embody Peter Roth’s commitment to innovative storytelling, love for writers, passion for the art form of television, and the critical importance of nurturing a diverse array of creative voices and portrayals on television. Students will gain first-hand experience in the world of television and access an unparalleled educational experience during this paid apprenticeship opportunity.

"We are delighted to announce our inaugural class of the prestigious Peter Roth Internship Program, honoring our dear friend and industry leader, Peter Roth. After a rigorous national selection process, we are honored to welcome the brightest young minds and the next generation of television's creators and leaders in Media and Entertainment,” said Maureen J. Reidy, the Paley Center's President and CEO. “We thank Greg Berlanti, Ava DuVernay, Chuck Lorre, Katie McGrath, and J.J. Abrams for their tremendous support and for investing in the future talent of our industry.”

"We are so excited to welcome and support such a talented, passionate, and dedicated cohort of future media executives, creators, writers, and thought leaders. I fully expect, and I am convinced, that they will make a significant contribution towards the betterment and nurturing of great television," said Peter Roth. "It is with great honor and gratitude that I applaud Maureen Reidy and her outstanding team at the Paley Center for having assembled such an impressive and impactful group of young minds to serve as our inaugural internship class."

“I am delighted by the selection of the inaugural internship class of 2021 at The Paley Center for Media in honor of the one and only Peter Roth,” said Ava DuVernay. “I wish our talented twenty nothing but success with their future endeavors and salute them as they begin to make their mark on the industry.”

“Congratulations to the twenty incredible college students who were selected for the 2021 Peter Roth Internship Class at The Paley Center for Media,” said Greg Berlanti. “The Berlanti Family Foundation is happy to support such an exciting group of students through our endowment to this paid internship program that will help all of them begin to establish long and meaningful careers that honor the program's one-of-a-kind namesake."

“Looking forward to what the talented students of the 2021 Peter Roth Internship Class at the Paley Center for Media will accomplish now and in the future,” said Chuck Lorre. “We welcome each of these industrious individuals into the internship program created in honor of my dear friend Peter Roth.”

"The future of television will depend on brilliant, diverse and bold points of view. Programs like this will help ensure opportunities for young people of all backgrounds to learn, collaborate and prepare for a career in the industry,” said Katie McGrath and J.J. Abrams. “We are thrilled for the 2021 Peter Roth Internship Class, and are honored to be associated with them and the legacy of a true television legend."

The following 20 students have been selected as the Peter Roth Internship Program Class of 2021:

Students were selected for this comprehensive paid internship through a competitive application process that evaluated their academic achievement, leadership skills, and commitment to the media industry. The Paley Center received hundreds of qualified applicants—undergraduate students from diverse backgrounds and underserved communities who are rising juniors and seniors with a GPA of 3.2 or higher from some of the most prestigious colleges and universities nationwide, including schools with top media programs.

Using the renowned Paley Archive, the Paley Center is uniquely positioned to provide an extensive course to help students better understand the importance of diverse voices and portrayals on television. Interns will also attend guest lectures, meet-and-greets, and Q&A sessions with television executives, talent, showrunners, writers, and other members of a creative team to gain an appreciation for the art of storytelling. The program will also include first-hand experience working at the Paley Center, along with site visits to networks, sets, and studios, to provide a valuable understanding of the business side of television.

After completing the program, students will join the Paley intern alumni association, where they will continue to receive expert advice and counsel, special networking opportunities and events, and make lifelong connections within the television industry.

The Paley Center for Media is a 501(c) (3) nonprofit organization that leads the discussion about the cultural, creative, and social significance of television, radio, and emerging platforms, drawing upon its curatorial expertise, an international collection, and close relationships with the media community. The general public can participate in Paley programs in both New York and Los Angeles that explore and celebrate the creativity, the innovations, the personalities, and the leaders who are shaping media. They can also access the Paley Center’s permanent media collection, which contains over 160,000 television and radio programs and advertisements. Through the global programs of its Media Council and International Council, the Paley Center also serves as a neutral setting where media professionals can engage in discussion and debate about the evolving media landscape. Previously known as The Museum of Television & Radio, the Paley Center was founded in 1975 by William S. Paley, a pioneering innovator in the industry.