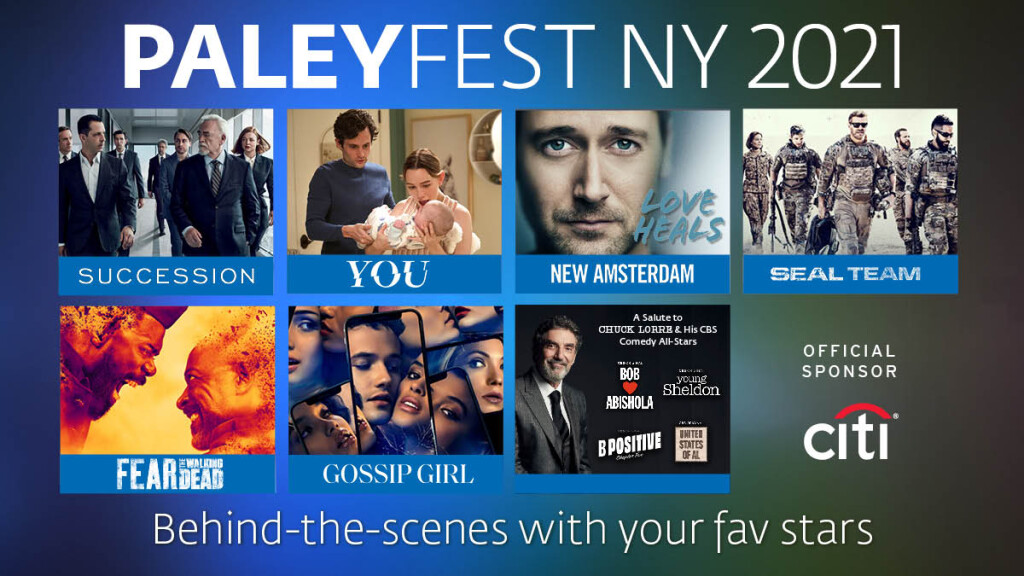 New York, NY, October 12, 2021 – PaleyFest NY is The Paley Center for Media's annual fall festival celebrating creative excellence in television, featuring conversations with a stellar list of stars and creators that take you behind the scenes of some of TV's most popular and acclaimed series.

The exciting lineup for this year's festival includes programs honoring the riveting dramas Succession, You, SEAL Team, and Gossip Girl, the fan favorite Fear the Walking Dead, a special conversation celebrating New Amsterdam (featuring the cast and honored guests from the World Health Organization), and a heartfelt and funny salute to the legendary producer Chuck Lorre featuring the stars of each of his popular CBS comedies Young Sheldon, Bob Hearts Abishola, B Positive, and United States of Al.

PaleyFest NY will be available to the public on Friday, October 15 at 10:00 am ET. With Citi returning as an official sponsor and card of this iconic festival, Citi cardmembers can view programs on Tuesday, October 12 at 10:00 am ET, three days ahead of the general public. For more information about the benefits of being a Citi cardmember, including information regarding early access to the programs featured, please visit citientertainment.com. Paley Center Members also receive early access to the programs. Please visit paleycenter.org/join-us/ to learn more about becoming a Member of the Paley Center.

“We are excited to present the PaleyFest NY 2021, which brings some of the most anticipated shows to millions of fans available on the Paley Center’s YouTube channel,” said Maureen J. Reidy, the Paley Center’s president and CEO. “We are grateful for the continued support from our friends at Citi returning as our official sponsor.”

"When the World Health Organization reached out to us at New Amsterdam, we thought we were being punked. We're a TV show about fake doctors and they're... the W.H.O.! After they assured us that they wanted to commend us on the work we do, we knew the Paley Center was the place to make it happen. We couldn't be happier to be back at Paley where it all began for us,” said David Schulner, Creator, Executive Producer, and Showrunner, and Peter Horton, Executive Producer, New Amsterdam.

“PaleyFest has become the ultimate celebration of television, allowing us to share with the people who watch our work on their screens each week. I’m thrilled to have fans join me and cast members from my four current CBS shows for an intimate discussion about what goes into making people laugh, led by Variety’s Mike Schneider,” said Chuck Lorre from A Salute to Chuck Lorre & His Comedy All-Stars.

"It's a very big deal to be invited to PaleyFest. We're thrilled to participate in a panel to talk about the new season of You. Everyone involved poured so much hard work and love into our production during a very challenging time in the world, so it means a lot to us to be able to share it," Sera Gamble, Executive Producer, Showrunner, and Writer, You.

“I’ve always loved PaleyFest and could not be more excited to join my incredible and inspirational Gossip Girl cast to discuss all the twists and turns of our first season,” said Joshua Safran, Executive Producer and Showrunner, Gossip Girl.

“I've long been a fan of PaleyFest and all the work they do to celebrate my favorite television shows. So it's a particular honor for Fear The Walking Dead to be included in this fall's PaleyFest lineup –one I'm extremely grateful for because it gives us the chance to share our excitement for what lies ahead this season, and to spotlight all the creative talent in front of and behind the camera who help bring our little corner of the zombie apocalypse to life,” said Andrew Chambliss, Showrunner & Executive Producer, Fear the Walking Dead.

PaleyFest NY supports the Paley Center’s many education initiatives, including education workshops serving 10,000 youth annually, the PaleyImpact series featuring programs centered on today’s most pressing social issues and the role of media in our society, as well as the continued preservation of the Paley Archive, featuring more than 160,000 historically significant television and radio programs.

A Salute to Chuck Lorre & His Comedy All-Stars

The Paley Center for Media, a 501(c)(3) nonprofit organization with locations in New York and Los Angeles, leads the discussion about the cultural, creative, and social significance of television, radio, and emerging platforms. Drawing upon its curatorial expertise, an international collection, and close relationships with the leaders of the media community, the Paley Center examines the intersections between media and society. The Paley Center's premier programming can be viewed on the Paley Center’s YouTube channel and the Paley Center's Facebook page. The general public can access the Paley Center’s permanent media collection, which contains over 160,000 television and radio programs and advertisements, and participate in programs that explore and celebrate the creativity, the innovations, the personalities, and the leaders who are shaping media. Through the global programs of its Media Council and International Council, the Paley Center also serves as a neutral setting where media professionals can engage in discussion and debate about the evolving media landscape. Previously known as The Museum of Television & Radio, the Paley Center was founded in 1975 by William S. Paley, a pioneering innovator in the industry.