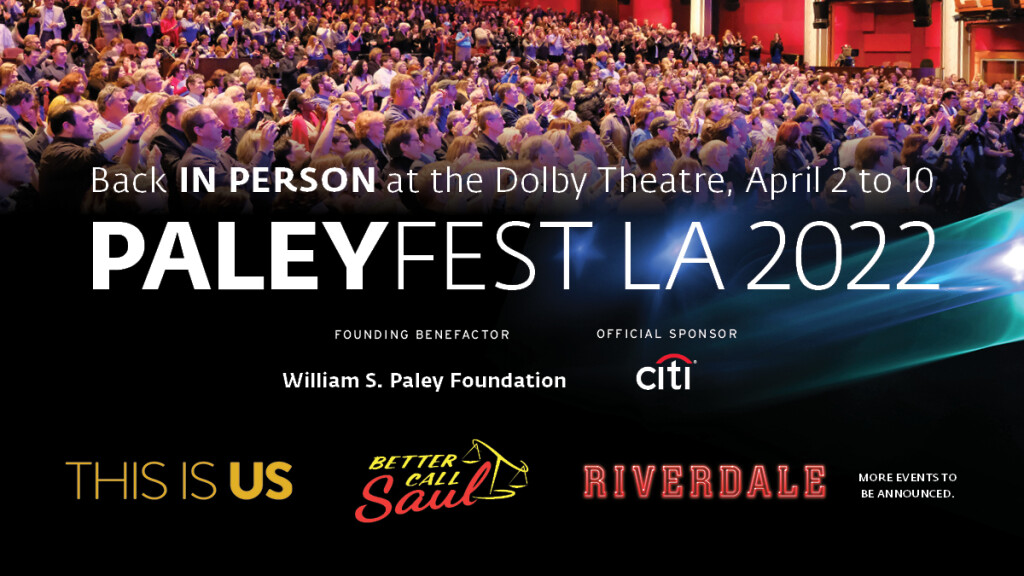 The Paley Center for Media Presents the Return of PaleyFest LA in Person at the Dolby Theatre April 2-10, 2022

Los Angeles, CA, December 16, 2021 – The Paley Center for Media announces the return of the 39th Annual PaleyFest LA on Saturday, April 2 through Sunday, April 10 at the Dolby Theatre in Los Angeles. After two years of its virtual format, PaleyFest LA returns to the public as an in person experience featuring leading talent from the most acclaimed and buzzworthy TV shows for exclusive behind-the-scenes conversations.

The first program selections announced for this year's festival include NBC and Twentieth Television's This Is Us, AMC and Sony Pictures Television's Better Call Saul, and The CW and Warner Bros. Television's Riverdale. On January 18, Paley Center will announce the festival's full schedule and the participating casts and creative teams.

Paley Members and Citi cardmembers will have access to advance ticket sales from January 18-20, 2022 as follows: Paley Center’s President’s Circle, Patron Circle (Silver, Gold, Platinum), Partner Members, and Citi cardmembers can purchase tickets starting on Tuesday, January 18 at 7:00 am PT, and Paley Members (Individual, Family, Supporting) can access tickets on Thursday, January 20 at 7:00 am PT. To become a Paley Member, please join paleycenter.org/join-us. The general public will have access to purchase tickets on Friday, January 21 at 7:00 am PT, available until tickets sell out.

"We are thrilled to return in person, once again, to celebrate television's best and brightest at the Dolby Theatre. PaleyFest LA provides devoted fans and Paley Members with unparalleled access to leading talent and creative minds from today's top TV shows for a once-in-a-lifetime experience,” said Maureen J. Reidy, the Paley Center's President and CEO. “We thank our friends at Citi and The William S. Paley Foundation for their continued support of this iconic festival and their commitment to celebrating the brilliant voices of television.”

“We are honored to be part of this prestigious festival. Looking forward to talking all things This Is Us with you, one last time," said Dan Fogelman, Creator and Executive Producer, This Is Us. ​

“Saul Goodman might only be the "World's 2nd Best Lawyer" –but he scores an invitation to PaleyFest?! We are thrilled and honored to talk about our show and its final season with the brilliant (and good-looking) folks at this year's PaleyFest,” said Peter Gould, Showrunner and Executive Producer, Better Call Saul.

PaleyFest LA is the nation’s original and longest-running festival celebrating creative excellence in television with the most acclaimed and impactful shows and stars including Lucille Ball, Barbra Streisand, George Lucas, Ava DuVernay, Norman Lear, and the casts and creative teams behind The Sopranos, The West Wing, Mad Men, Mary Tyler Moore, Parks and Recreation, Will & Grace, The Walking Dead, and countless more. While television fans eagerly await the in person start of PaleyFest LA 2022, they will have the opportunity to relive some of PaleyFest LA’s best moments on the Paley Center’s YouTube channel. Some memorable highlights include conversations with the casts from Lost, The Golden Girls, The Big Bang Theory, and many more.

PaleyFest LA supports the Paley Center’s many education initiatives including education workshops serving 10,000 youth annually, the PaleyImpact series featuring programs centered on today’s most pressing social issues and the role of media in our society, and the continued preservation of the Paley Archive, featuring more than 160,000 historically significant television and radio programs.

Become a Member today and receive advance ticket access and discounts to PaleyFest LA tickets before the general public. For more information on the many benefits of Paley Center Membership, please visit paleycenter.org/join-us

The Paley Center for Media adheres to the latest Los Angeles County health and safety guidelines and the Dolby Theatre policies to provide a safe environment for all PaleyFest attendees. In compliance with these guidelines, PaleyFest attendees must present proof of full vaccination status or a negative COVID-19 PCR test taken within 48 hours of the event or a negative COVID-19 Antigen test taken within 24 hours of the event. Masks are required for guests over two years old and may only be removed while actively eating or drinking in designated areas.